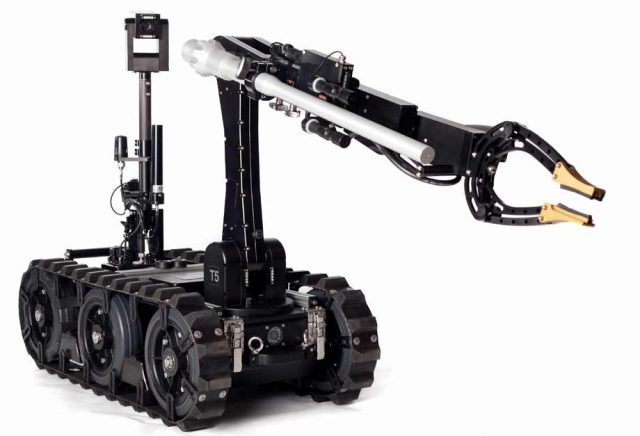 Measuring only 17” (44 cm) wide, the CALIBER® T5 is best suited for EOD and SWAT teams needing to deploy a compact robot into narrow passages such as buses, trains and planes. Weighing in at only 150 lbs (68 kg), the robot can be quickly deployed from a trunk of a car and with a vertical reach of 68” (173 cm) the CALIBER® T5 can reach most suspicious devices. The optional Arm Extension Kit extends the reach of the arm to 105” (267 cm); allowing for easy access to the overhead compartments in airplanes or buses.

The T5 comes equipped with a single Disrupter Mount and is interoperable with most popular brands of recoilless disrupters. Integrated Cross hairs on the CCU screen with 2 green lasers and 1 color camera are used for sighting weapons. 4 independent firing circuits are used for initiating disrupters, bottle charges or x-ray systems.

Powerful drive motors control the chain driven rubber tracks, while a 3 speed transmission accelerates the robot up to 5 mph (8 km/h) Chile providing the low end torque to climb steep stairs and easily navigate all types of rugged terrain including snow and sand.

The weather resistant CCU provides precise, simultaneous operation using the variable speed drive joystick and dedicated Pan-Tilt-Zoom (PTZ) Camera joystick. An intuitive 3D layout of the robot on the deck of the CCU includes backlit buttons and user feedback ensuring ease of use during operations. The low reflection 15” (38.1 cm) LCD color screen shows clear images in both bright and low light conditions from any of the 5 color cameras. To minimize unsafe actions, the CCU requires a twostep function for firing disrupters or weapons by featuring a removable key switch and dual pushbutton operation. Video jacks allow for camera output to an auxiliary monitor. Audio jacks allow for output to powered speakers. Optional features include Picture-in-Picture (PIP) (COFDM only) and Digital Video Recorder for recording MPEG video, JPEG images, and MP3 audio

24 VDC quick-change rechargeable batteries extend your mission time to 2 – 4 hours (mission dependent). The Feedback screen on CCU indicates the battery status of the robot and CCU. It literally takes seconds to swap batteries or you can charge the batteries directly inside the robot chassis without removing them. 2 robot battery packs are provided as a part of the standard package.