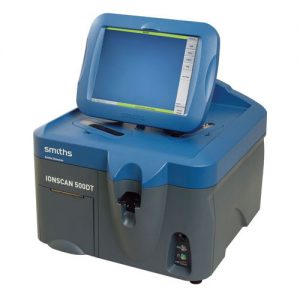 The IONSCAN 500DT fills the growing need of security professionals to have the ability to detect a wide range of substances and to be able to adapt as threats and their needs change. By incorporating two IMS detectors in a single unit, the IONSCAN 500DT is capable of detecting and identifying explosives and narcotics during a single analysis, giving you the ability to detect a broader range of substances while maintaining the high sensitivity and specificity you expect from Smiths Detection.

Building on the success and trusted technology of the IONSCAN family of trace detectors, the IONSCAN 500DT has an ergonomic design and a large, color touch-screen display, built-in printer and 40GB internal hard drive. Further advancements include full PC functionality, increased memory and networking capabilities.

The IMS detectors in the IONSCAN 500DT are the same as in the IONSCAN 400B, of which over 6000 are in use by aviation security, government and law enforcement agencies, the military and by private security companies.